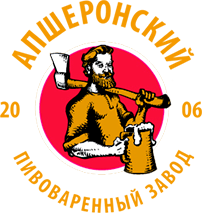 English versionPlant
About our plant

The Apsheronsk Brewery was commissioned in 2006. The plant was founded in the town of Khadyzhensk, the Apsheronsk District, in an area with pristine and primary nature. Forest, mountains and clear water  these are what characterizes the area where quality, cleanliness and good taste have become the main characteristics of the products.


The plants products include beer and soft drinks, which are based on the unique natural low mineralized water and traditional drinks recipes. Its no coincidence that a woodcutter, a real resident of the Apsheronsk District, a hard worker willing to relax over a glass of high-quality beer after his work and gladden his loved ones with natural soda water, was chosen as the companys logo.


The company initially made high quality drinks under its own trade marks to be its standard. The production is carried out in strict accordance with the technologies, on modern and high-tech equipment, in compliance with the recipes, and young and energetic professionals working at the plant are trained abroad by exchanging experience with the best European brewing masters.


The range of products which you can find in our catalog includes both light and dark grades of filtered and unfiltered beer, as well as carbonated soft drinks made of natural sugar syrup and low mineralized water.

The products were initially sold and are distributed currently through the retail outlet network. But the plants drinks quickly found their fans among the residents of the Krasnodar Region, and the Apsheronsk Brewery began to create its own network of ECO PUBS located in Krasnodar and the cities of the Krasnodar Region, and their number is constantly increasing (see detailed information on the interactive map).

In 2017, the plant mastered the production of the so-called tank beer. The tank beer is a type of beer that is poured directly from special tank trucks into tanks of bars using a special injection technology; thus, it is not exposed to the environment being transported from the brewery to a consumer, and therefore, it does not need additional processing (pasteurization). The beer has the same taste it had when it left the brewery basements.

Tank beer is considered to be the most natural of all types of beer (bottled beer or that one in kegs); therefore, it has gained incredible popularity in Europe, especially in the Czech Republic; fans of the tank beer consistently note its special and fresh taste, as well as soft effect on the body. The Apsheronsk Brewery is one of the first in the Krasnodar Region that began to produce and sale tank beer through its own Tanks Beer ECO PUB Network.

The Apsheronsk Brewery is a continuous development with the same quality of products.

We invite all partners to cooperate!